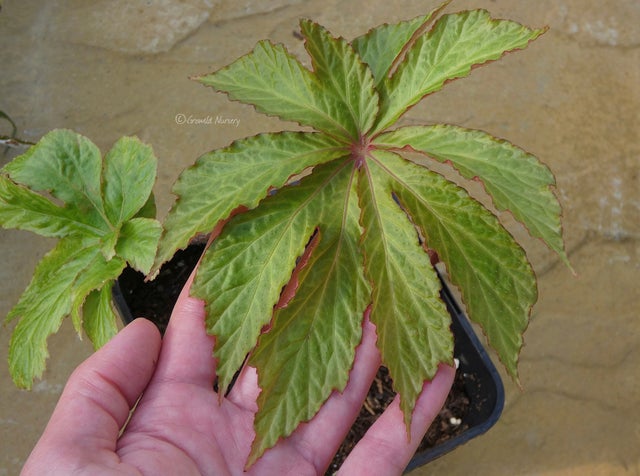 Begonia aff. hemsleyana Back in stock 2023

This species came as Begonia circumlobata, a rhizomatous species widely distributed in China. Although this species displays significant variation in plant size and morphology of leaves and flowers, which can be white, whitish-pink, pink or nearly red, we highly doubt this is B. circumlobata - enough doubts to remove the original name it came with. It has such a strong affinity to B. hemsleyana and we think this could be either a natural hybrid with one of its parents being B. hemsleyana, or more likely a form of B. hemsleyana.

This clump-forming plant has wavy edges to its leaves and strongly divided, deeply lobed, palmate foliage that becomes more lobed as it ages, so that the leaves do eventually resemble a typical B. hemsleyana if not a more robust form. These are held on upright, purple-red stems covered in dense, downy, white hairs. Flowering June to September. Height 80 to 100 cm. Part shade in a cool, sheltered position in moist, humus rich, well-drained soil. Not tested for hardiness (though has taken a very light frost with a mulch), so we would suggest growing it as a potted specimen in the garden and bringing it in before the first frosts.